This Nickscast are covering an unfortunately named fandom: TransFans (Transformers fans). What is it about a franchise so tied to toys and the 80s that helps its fandom to grow and thrive today? What is its key demographic? Why did Orson Welles get involved in the Tranformers movie? And where is all the Transformers fanfic? This week, we're going to transform and roll out (to find out)! Next week, we'll be working our way through the mysterious pines to a place thats all sunshine and roses on the outside, but suspicious and enigmatic on the inside; we'll be talking about Twin Peaks fans. ## Episode outline ### [Last episode's](http://fanthropological.com/e/27-sherlockians/) Famous Last Words **Z:** Why did Orson Welles agree to be in this movie? > The Transformers: The Movie was the final film to which Orson Welles contributed. Welles was in declining health during production. Shortly before he died, he told his biographer, Barbara Leaming, "You know what I did this morning? I played the voice of a toy." He elaborated, "I play a planet. I menace somebody called Something-or-other. Then I'm destroyed. My plan to destroy Whoever-it-is is thwarted and I tear myself apart on the screen." According to director Nelson Shin, Welles had been pleased to accept the role after reading the script and had expressed an admiration for animated films > > — [Wikipedia - The Transformers: The Movie](https://en.wikipedia.org/wiki/The_Transformers:_The_Movie) > **Z**: ... I found a reddit AMA ... > **G**: Orson Welles did an AMA?! > **T**: From BEYOND THE GRAVE > It is his enduring legacy, and I guess Citizen Kane or something > > — G **G:** Why was Weird Al's *Dare to be stupid* included in the movie? Who thought that was a good idea? > It ...

Do you have your your goggles fastened? Are your firmly seated on your velocipede or dirigible? Tune in over the wireless as we talk about Steampunks! What is Steampunk (and is it over)? Who are they and what makes them... tick? Stay tuned (as we stoke the coals)! Everyone's a fan! Find more like this: [fanthropological.com](http://fanthropological.com) Find us on social media Twitter: [@thenickscast](http://twitter.com/thenickscast) Instagram: [@thenickscast](http://instagram.com/thenickscast) Facebook: [fb.com/thenickscast](http://fb.com/thenickscast) Youtube: [youtube.com/thenickscast](http://youtube.com/thenickscast) Email us about fandoms you want to hear about: [[email protected]](mailto:[email protected]) Play-by-play 00:00 - Cold Open 00:05 - Theme Song 00:25 - Introduction 01:10 - Who are Steampunks? What is Steampunk? 03:31 - Trivia 09:42 - Why Steampunk? 1:03:38 - Spotlight: [Soulless](http://yenpress.com/soulless/) and [Girl Genius](http://www.girlgeniusonline.com/) 1:06:17 - Goodbye! 1:07:40 - Outtakes Citations "Steampunk = Mad Scientist Inventor [invention(steam x airship or metal man/baroque stylings) x (pseudo) Victorian setting] + progressive or reactionary politics x adventure plot" -Jeff Vandermeer, The Steampunk Bible ["Steampunk - Fanlore"](http://fanlore.org/wiki/Steampunk) ["Beyond Victoriana | A Multicultural Perspective on Steampunk"](https://beyondvictoriana.com/) ["Airship Ambassador »"](http://www.airshipambassador.com/) ["What is Steampunk, and is it over?"](http://www.themarysue.com/what-is-steampunk-and-is-it-over/) ["What the hell is Steampunk?"](http://www.huffingtonpost.co.uk/william-higham/steampunk-what-the-hell-is-it_b_1015192.html) ["An Anthropological Perspective of the Steampunk Culture"](https://www.academia.edu/6727453/Steam_Culture_An_Anthropological_Perspective_of_the_Steampunk_Subculture) ["Steampunk: Reimagining Trash and Technology"](http://blog.castac.org/2013/08/steampunk-reimagining-trash-and-technology/) ["Does Steampunk have an ideology?"](http://drupagliassotti.com/2009/02/13/does-steampunk-have-an-ideology/) ["Does Steampunk have politics?"](http://drupagliassotti.com/2009/02/11/does-steampunk-have-politics/) ["Glue some gears on it (and call it Steampunk)"](https://www.youtube.com/watch?v=TFCuE5rHbPA) ["Wikipedia - Steampunk"](https://en.wikipedia.org/wiki/Steampunk) ["Oxford Dictionaries - Steampunk"](http://oxforddictionaries.com/definition/english/steampunk) ["Steampunk Moves Between 2 Worlds"](http://www.nytimes.com/2008/05/08/fashion/08PUNK.html) ["K.W. Jeter's Letter to Locus"](http://i.imgur.com/M7ema1o.png) ["Crafting Yesterday's Tomorrows: RetroFuturism, Steampunk, and the Problem of Making in the Twenty-First Century"](http://www.tandfonline.com/doi/pdf/10.2752/174967714X14111311182767) ["Steam Dream"](http://thephoenix.com//Boston/Life/61571-Steam-dream/) ["Steampunk Preppers.."](https://www.gunandgame.com/threads/steampunk-preppers.146495/) Vintage Tomorrows, Dir. Byrd McDonald (Netflix), 2015 Steampunk'd (Documentary), 2015, Game Show Network Credits Music: All music this week is courtesy of our very own, Nick G! Logo: ["Glasses"](https://thenounproject.com/term/glasses/132894) by [Anton Anuchin](https://thenounproject.com/antonwebium) used under [CC BY 3.0](http://creativecommons.org/licenses/by/3.0/us/) ["Steampunk"](https://thenounproject.com/term/steampunk/203055) by[Imangalieva Luiza](https://thenounproject.com/mangoluiza) ... 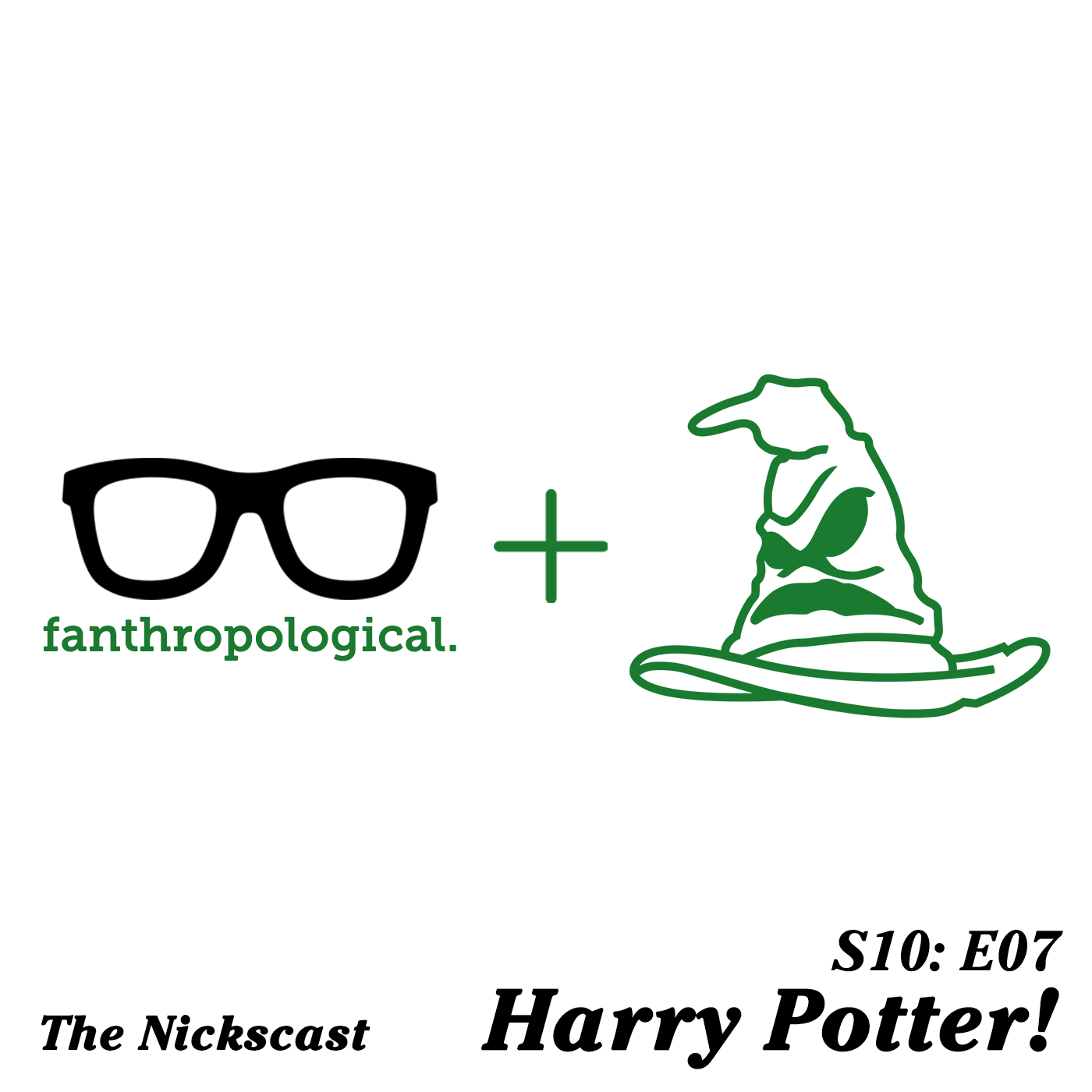 Harry Potter - Back to Hogwarts with the Real Weird Sisters

# Description We return to Hogwarts to chat with the Real Weird Sisters about why *Harry Potter* is so important to fandom in general and **still** so popular. This episode is a follow up to our (very) early episode about the series [here](https://fanthropological.com/e/3632cca54d92c4/). And who are The Real Weird Sisters? Hailing from Bozeman, Montana, Alice and Martha, grew up reading, rereading, and re-re-reading the *Harry Potter* series. **Alice**, who was seven when Harry Potter and the Sorcerer's Stone was published,** estimates that she has read the series' first book over 75 times**! Although Martha's tally isn't quite as high, she would like to clarify that she was a mere toddler when Alice first started reading the books, so she was doomed to forever be six years behind. Both sisters have made local news for their *Harry Potter* fandom. Alice was interviewed for a newspaper in 2005 after she read *Harry Potter and The Half-Blood Prince* overnight, and Martha and her friends were on TV in 2011 while in line for the midnight premiere of *Deathly Hallows Part 2*. Throughout their lives, Alice and Martha have shared a close and common bond in *Harry Potter*. Now that they are adults and living in two different parts of the country (Chicago and Montana), they have decided to broadcast their love for *Harry Potter* to the world in weekly podcasts about what they see as the greatest literary masterpiece of our time. ## Episode Outline This week on the show we talk about... * the importance of the series growing up with the fans; * fans' feelings about post-*Harry Potter* releases; * the importance of the series' characters; * divisions in modern *Harry ...