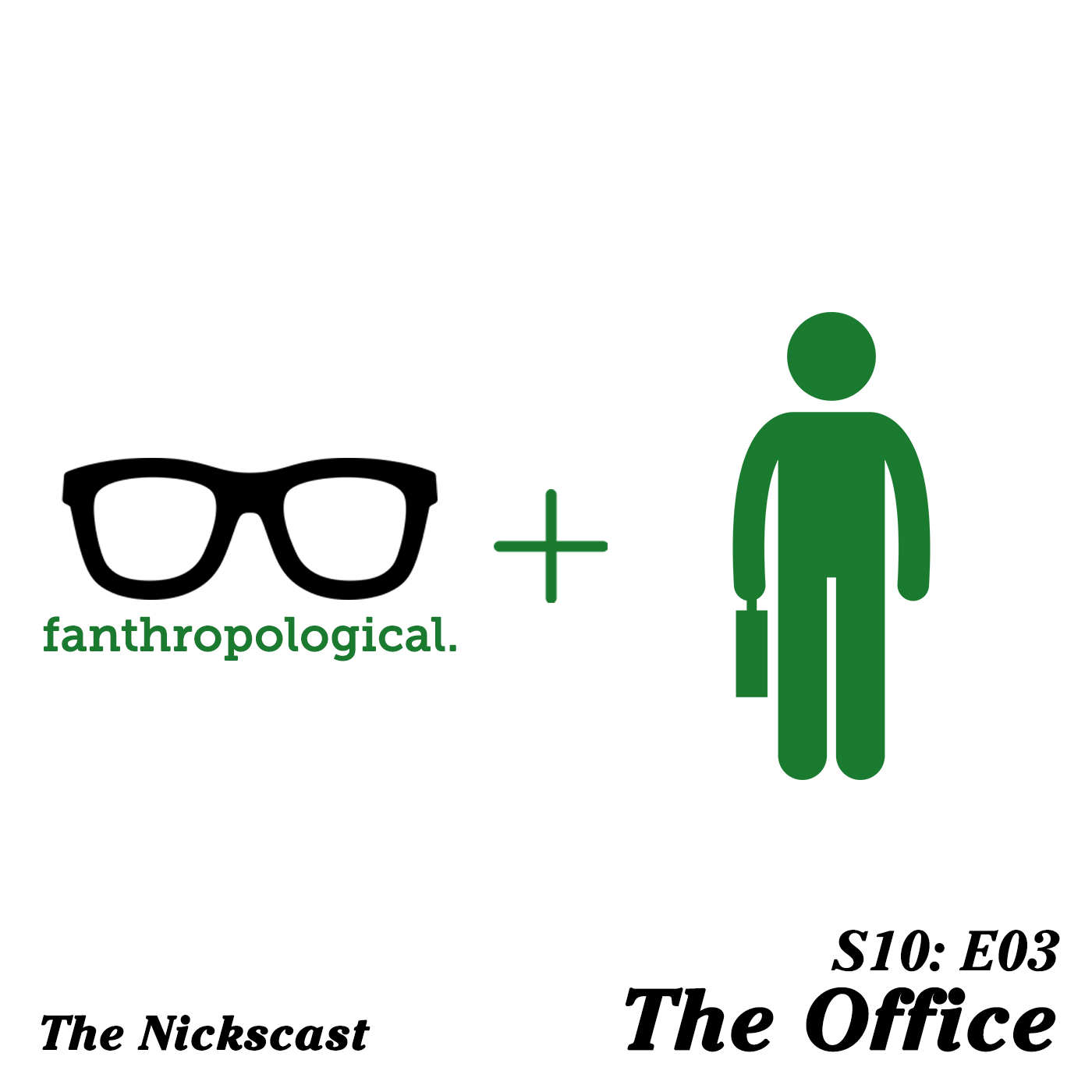 The Office is a phenomenally popular show and fans can't seem to get enough, even after its 9 seasons ended in 2012. Is it the best show ever made or a moment in time that's shown itself to be problematic? ## Episode Outline **Topics:** The Office, Sitcoms, Long-Running Shows, Problematic Characters, Feel-Good Shows, Cringe Comedy ### First Impressions #### Z: Honestly, this wasn't a show that I thought about much when it was first airing and I'd hear people talking about it. I'd watched the UK version of Life on Mars around that time, and after hearing about how it had been butchered in its American adaptation, I was skeptical about the US The Office's quality. This impression only strengthened after I binged my way through the UK version of the show, and was completely and utterly impressed by just how hilarious it was while centring on Ricky Gervais' utterly despicable and inept David Brent. There was no way an American adaptation could take this witty and dry show and make something good -- plus there was no way that American audiences would have the patience to make it through the lead's eventual, though rocky, transformation into a caring, compassionate human being. But, here we are, covering this ongoing fandom on the show, so I must've been wrong about some aspect of the show... #### T: I mostly have seen the Office in gifs and memes (either referencing the show or involving the show), so I got the impression that the Office is kind of like the Simpsons or flossing in that it's just something that people have experienced and use a shared cultural reference. I don't know of any die-hard fans, and it doesn't seem like the sort of thing that folks are super passionate about, but sort of passively love? Also, it seems pretty cringey and I'm not super a fan of that style of humour. #### G: The cringiest thing on TV, where everything being a bummer and having awkward resolutions was the order of the day. Didn't really ever see where the 'heart' came from, let alone people watching it multiple times. ### Some Observations - The show's setting is psychologically comforting and neutral and the way that it finds humour in mundane situations leads people to watch and feel calmed/destressed - According to [Google Trends](https://trends.google.com/trends/explore?date=all&geo=US&q=%2Fm%2F08jgk1,%2Fm%2F07zhjj,%2Fm%2F0557yqh) the show's popularity has beaten out rival shows (Parks and Recreation, How I Met Your Mother) in recent years - Dwight Schrute's character arc could be the best in American TV - People who like the office are likely to be those who want to have control over others ### Conclusions - Z is going to watch the whole dang series - T might watch another episode or two, but the show didn't really get its hooks into him - G has already watched the series once, and would rather just go back and re-watch Parks and Rec ### Famous Last Words What did we have to say about next week's topic, Rush, with only our first impressions? **Z:** In fans' opinion… how does Clockwork Angels stack up to 2112? **T:** How much of Rush fandom is about Rush vs Prog Rock? **G:** I know a lot about the band… they seem to have a lot of fans… have they continually collected fans, or did everyone just show up around Tom Sawyer and aged? ## Where can you find us? Pretty much everything we do is `something/thenickscast`, but specifically... * If you're looking for this podcast (Fanthropological), you can find it at [Fanthropological.com](https://fanthropological.com) or on different podcatchers including [Spotify](https://open.spotify.com/show/2IVp8MBIUyCqlKyZn79iHn), [Apple Podcasts](https://itunes.apple.com/us/podcast/fanthropological/id1163621210?mt=2), [Google Podcasts](https://www.google.com/podcasts?feed=aHR0cDovL2ZlZWRzLnBvZGlhbnQuY28vZmFudGhyb3BvbG9naWNhbC9yc3MueG1s) and many others! * Keep up-to-date with our latest goings-on on [Facebook](https://facebook.com/thenickscast), [Twitter](https://twitter.com/thenickscast), or [Instagram](https://instagram.com/thenickscast), all `@thenickscast` * We also occasionally create extra content about fandom including convention coverage and interviews on [YouTube.com/thenickscast](https://youtube.com/thenickscast) * We have some fine merchandise available at [shop.thenickscast.com](https://shop.thenickscast.com) (and we'd love your support!) * If all else fails, you can email us: [[email protected]](mailto:[email protected]) ## What is "Fanthropological"? Every week, Fanthropological delivers over an hour of fandom-related "fanalysis" covering a different fandom every week and giving you hard data, history, special guests, and, of course, speculation! We cover topics spanning the gamut of anime, manga, comics, video games, comics, movies, books, television, and, in general, geek culture. ## Credits * ["Bass Meant Jazz"](https://freepd.com/music/Bass%20Meant%20Jazz.mp3) by [Kevin MacLeod](https://freepd.com/artists.php), which he donated to the [Public Domain](https://freepd.com) * All other music and sound for this week's episode were provided by Nick Green! ## Top Links [r/DunderMifflin - Theory on Why The Office is so Appealing](https://www.reddit.com/r/DunderMifflin/comments/a95acz/theory_on_why_the_office_is_so_appealing/) [Collider - Michael Schur Explains Why "The Office" Survived Past Season 1 Against All Odds](http://collider.com/why-the-office-survived-past-season-1/#steve-carell) [Bustle - Can You Be Addicted to Watching "The Office"? Here's Why You Actually Can't Ge Enough](https://www.bustle.com/p/can-you-be-addicted-to-watching-the-office-heres-why-you-actually-cant-get-enough-8073956)
Previous Episode
Next Episode

Minisode: Does Anyone Care About 4k?

What if you were listening to the latest episode in Dolby Surround 11.1 (that's right, this one goes to 11.1)!? Well, probably nothing, but we're sure someone out there would care. This week, we're talking about ~~the highest~~ super high definition displays, and unearthing why folks care so much about 4k resolution! All this in 20 minutes or less! **Sources** - Opening music, ["Diggin' til the Very End"](http://music.djcutman.com/album/volume-iv) by Dj CUTMAN used under [CC BY-NC-SA](https://creativecommons.org/licenses/by-nc-sa/3.0/) - Ending music, ["Bounty Hunter"](http://music.djcutman.com/album/volume-iv) by Dj CUTMAN used under [CC BY-NC-SA](https://creativecommons.org/licenses/by-nc-sa/3.0/) ...

[// Pregenerate link to episode ahead of time: - clicktotweet.com- sharelinkgenerator.com]: # This week, we need an expert to get to the bottom of the difference between yaoi and shonen-ai, for starters, as we dive into the world of Boys' Love fans (just in time for Anime North)! ## Where can I learn more about Sara (Feminist Fujoshi)? Sara is the writer and moderator of the blog Feminist Fujoshi on [Tumblr](http://feministfujoshi.tumblr.com/) and [WordPress](https://feministfujoshi.wordpress.com/). Sara's work on Feminist Fujoshi started on Tumblr in 2013 and she has even done some academic research on the subject! If you want to check out more of her work, you can find her on Twitter [@blusocket](twitter.com/blusocket) and soon on [Anime Feminist](https://www.animefeminist.com/)! ## Episode outline ### Fandom Facts **History and Origins:** > In English, often abbreviated BL. Written as BL or ボイズラブ in Japanese. The manga and anime genre of fictional male homosexual romance, created for a female audience. Used interchangeably with yaoi and shounen ai in English (but not in Japanese). > > — [Fanlore - Boys' Love](https://fanlore.org/wiki/Boys%27_Love) **Search Data:** Based on the search data, interest in the literary genre of ["Yaoi" is, generally, up](https://trends.google.com/trends/explore?date=all&q=%2Fm%2F0f9s9). There was a wave of interest that appears to have started in 2011, peaked in Summer of 2015, then has been on a bit of decline ever since. It appears that Yaoi might be the general term that Google wraps up search terms under. The top 10 countries, by search volume, for Yaoi, are as follows: Thailand, Phillipines, Chile, Vietnam, Bolivia, El Salvador, Mexico, Peru, Paraguay, Russia. ### [Last Episode's](http://fanthropological.com/e/#-name) Famous Last Words **Z** Did this genre emerge simply because folks saw these elements in other stories and wanted to make a quick buck? Or was it about expressing themselves? **T** How much BL is sports ...

The Nickscast wanders down a gritty alleyway, away from the bright lights and ads to jack-in to their terminals to talk about fans of cyberpunk! Is cyberpunk still relevant to today? What happened to it all? What does it mean for a work to be cyberpunk (vs transhuman) and what does it mean to be a fan of something so broad as a genre? We find out! Next week, we'll be having a special-guest friend (and fellow Nick) join us as we talk about fans of movies, cinephiles! ## Episode outline ### Fandom Facts **Origins:** Cyberpunk is a sub-genre of science fiction, and, as such, is hard to pin down in terms of a fandom. Sometimes it is an element of a work, and other times it is merely an aesthetic. > In the 1980s, authors like William Gibson and Bruce Sterling wrote dystopian novels set 20 Minutes into the Future, where they explored themes such as the impact of modern technology on everyday life, the rise of the global datasphere as an arena for communication, commerce, conflict, and crime, and invasive cybernetic body modifications. The heroes of these in dark and cynical stories were marginalized, disillusioned, and rebellious "punks" striving for survival against overwhelming odds, often futilely, in corrupt megacities and surreal cyberspace realms. Bruce Bethke called this Cyberpunk, and it was good. > > — [TVTropes - Punk Punk](http://tvtropes.org/pmwiki/pmwiki.php/Main/PunkPunk) It is often referred to as "a combination of lowlife and high tech". > There is no shortage of different definitions of cyberpunk > > — T Some examples of cyberpunk (or post-cyberpunk) works include: - Blade Runner - Ghost in the Shell - Neuromancer - Deus Ex - Bubblegum Crisis - Cowboy Bebop - Psycho-pass **Most Active:** According to this [analysis of novels and movies released each year ...