“Critical Role is an American web series in which a group of professional voice actors play Dungeons & Dragons. The show started streaming in March 2015, partway through the cast's first campaign” [https://en.wikipedia.org/wiki/Critical_Role](https://en.wikipedia.org/wiki/Critical_Role) \ \ Fandom Facts * Holy **crap** Critical Role is popular: is is the most popular it has ever been (aside from March 2019), but also, its popularity coincides with a [massive increase in popularity in Dungeons and Dragons](https://trends.google.com/trends/explore?date=all&q=%2Fg%2F11clghjr0y,%2Fm%2F026q9,%2Fm%2F04dzk1_) (but _not _Pathfinder) * There is a site entirely devoted to [stats about the critical role game](https://www.critrolestats.com): d20 rolls, puns, lore, you name it! * “After the split from Geek and Sundry, the cast announced a fundraiser for an animation of the popular Whitebriar arc. The campaign asked for $750,000 but reached $1 million within an hour, ending with a record-breaking $11.3 million in donations.” ### First Impressions **T:** I honestly had very little impression of what CR actually was. My only exposure was through following ItsGinnyDi on Twitter and seeing various Jester-related cosplay (I actually forgot that the show’s premise was voice-actors playing Dungeons and Dragons)! I might have seen some humourous animatics with Jester too… but when G said that the episodes are like three hours long and unedited, I was skeptical. **Z:** I think I first heard about this from G, and I thought it sounded kind of like The Adventure Zone. And that was kind of it. Not because I don’t find D&D interesting, but instead because I felt like I’d heard The Adventure Zone and I was good on the recorded tabletop RPG playing front. Aside from that, though, it seemed to me like it was kind of like the Game Grumps when they’d first started: The first big thing of its kind to really make headway into the mainstream. ### Observations _What we thought about the thing / fandom after reviewing it. Try to make this more of a review style._ ### Conclusions _Any concluding thoughts on the fandom._ _Z: _After reading about the phenomenon that is Critical Role and listening to the first episode of the second campaign, I feel pretty comfortable saying that it’s just not for me. The episode that I listened to had a good variety of metagame chatter, general in-character conversation and exploration, and even a bit of combat, but trying to listen to what seemed like at least 7 players and one DM was just too much for me to do passively. And, to be honest, it seemed kind of slow, at least in comparison to The Adventure Zone. But I think that comparing the two is like comparing a svelte young elf who stumbles across the recipe for a Tex-Mex delicacy and an energetic tiefling with a penchant for mischief. One interests me enough to pull me through over 100 hours of recorded D&D and the other makes it fairly easy to understand why people enjoy them and the game they’re a part of, but not to listen in to the show they’re a part of. Links: [How Do I Beat the Matt Mercer Effect?](http://www.reddit.com/r/DMAcademy/comments/a999sd/how_do_i_beat_the_matt_mercer_effect/) [Ginny Di's Guide to Catching Up on Critical Role](http://twitter.com/itsginnydi/status/1113475920637992960) [Google Trends Data](http://trends.google.com/trends/explore?date=all&geo=US&q=%2Fg%2F11clghjr0y,%2Fm%2F026q9,%2Fm%2F04dzk1_) [CritRoleStats](http://www.critrolestats.com) [Critical Role on Fanlore](http://fanlore.org/wiki/Critical_Role) [Thoughts on Critical Role vs The Adventure Zone?](http://www.reddit.com/r/DnD/comments/9f3fv4/thoughts_on_critical_role_vs_the_adventure_zone/) [The rise of D&D liveplay is changing how fans approach roleplaying](http://www.theverge.com/2017/11/16/16666344/dungeons-and-dragons-twitch-roleplay-rpgs-critical-role-streaming-gaming) ## Where can I get updates? If you want to follow us on social media, we’ve got you covered: * Facebook: [facebook.com/fanthropological](https://facebook.com/fanthropological) * Twitter: [@fanthropologic](https://twitter.com/fanthropologic) And of course, we can be found where all fine podcasts are found (e.g. [Spotify](https://open.spotify.com/show/2IVp8MBIUyCqlKyZn79iHn), [Apple Podcasts](https://itunes.apple.com/us/podcast/fanthropological/id1163621210?mt=2), [Google Podcasts](https://www.google.com/podcasts?feed=aHR0cDovL2ZlZWRzLnBvZGlhbnQuY28vZmFudGhyb3BvbG9naWNhbC9yc3MueG1s)). Oh, and here at [fanthropological.com](https://fanthropological.com) ## What is Fanthropological? Every week, our podcast, Fanthropological, delivers about an hour of fandom-related "fanalysis" covering a different fandom every week and giving you hard data, history, special guests, and, of course, speculation! We cover topics spanning the gamut of anime, manga, comics, video games, comics, movies, books, television, and, in general, geek culture. ## Who are you? We are the Nickscast! Three products of late-80s / early-90s pop culture who love exploring fandom and everything geek … who also happen to have been best buddies since high school, and all happen to be named Nick. We started the Nickscast as a labour of love, and as a place to entertain and to discuss our love of fans and fandom. We want to help others learn more about different fandoms, and to create empathy with other fans. If you want to learn more about us, you can follow us on most social media @thenickscast ([Facebook](https://facebook.com/thenickscast), [Twitter](https://twitter.com/thenickscast), [Instagram](https://instagram.com/thenickscast)), see all of our projects on [thenickscast.com](https://thenickscast.com), or [email us](mailto:[email protected]). ## Credits * All music for this week's episode were provided by Nick Green!
Previous Episode
Next Episode It’s fair to say that fans can take things too far, right? To the point of taking certain facts of a series and canonizing (a _biblical_ term) them, deciding which elements are ‘right’ and ‘wrong’? Or even mixing up canon and tradition and requiring long-running media to follow old rules because that’s the way it’s always been! In this episode, we dig a bit into what canon means, in fandom, and try to answer the question… as fans, who needs canon, anyway? Also covering topics as: * Curative fandom, and the appeal of consistency and meaning * How canon justifies fan investment * A bunch of nonsense about intertextuality, worldbuilding, mythology, prescriptivism and descriptivism And more! All in under thirty minutes. ## Episode Outline **Topics:** Avoiding chaos via canon, consistency and rules in stories, the reality of multiple truths and perspectives, a brief tangent on the origins of the word canon, canon as ‘integrity’ of media, how canon imbues meaning, curative fandom, canon as constraints, being beholden to canon, canon as justification for fan investment, descriptivism vs prescriptivism, worldbuilding vs mythology vs canon, and tirades about Doctor Who and the Legend of Zelda_._ ## Where can I get updates? If you want to follow us on social media, we’ve got you covered: * Facebook: [facebook.com/fanthropological](https://facebook.com/fanthropological) * Twitter: [@fanthropologic](https://twitter.com/fanthropologic) And of course, we can be found where all fine podcasts are found (e.g. [Spotify](https://open.spotify.com/show/2IVp8MBIUyCqlKyZn79iHn), [Apple Podcasts](https://itunes.apple.com/us/podcast/fanthropological/id1163621210?mt=2), [Google Podcasts](https://www.google.com/podcasts?feed=aHR0cDovL2ZlZWRzLnBvZGlhbnQuY28vZmFudGhyb3BvbG9naWNhbC9yc3MueG1s)). Oh, and here at [fanthropological.com](https://fanthropological.com) ## What is Fanthropological? Every week, our podcast, Fanthropological, delivers about an hour of fandom-related "fanalysis" covering a different fandom every week and giving you hard data, history, special guests, and, of course, speculation! We cover topics spanning the gamut of anime, ... 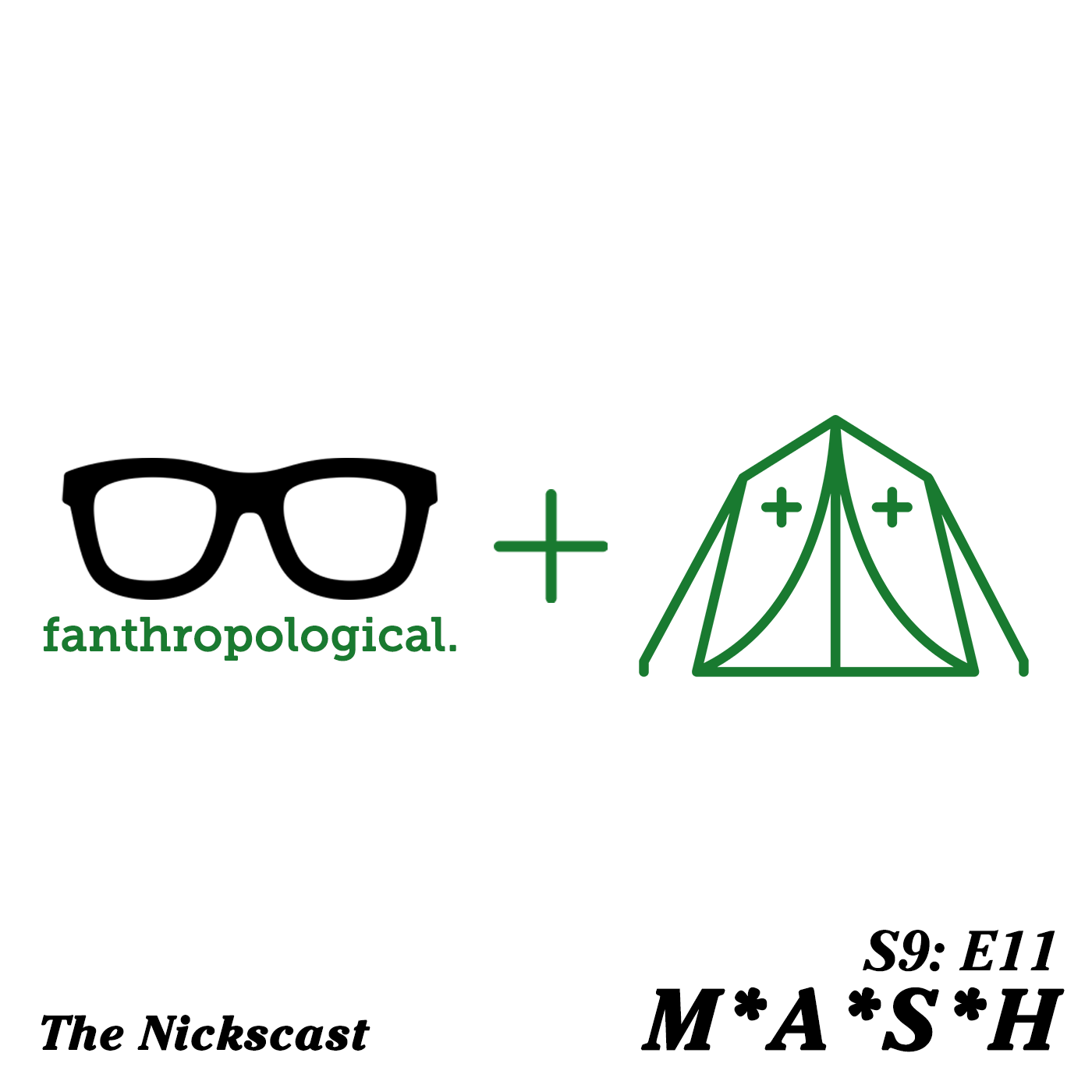 Where is the fandom today, and would they even want a M*A*S*H reboot? What would that even look like? We're giving you the best care anywhere* (as far as a podcast goes) on this week's episode! *Please consult with your physician for any actual medical care you may need. We are not doctors. ## Episode Outline ### Fandom Facts **History and Origins:** > M*A*S*H is an American war comedy-drama television series that aired on CBS from 1972 to 1983. It was developed by Larry Gelbart, adapted from the 1970 feature film M*A*S*H, which, in turn, was based on Richard Hooker's 1968 novel MASH: A Novel About Three Army Doctors. The series, which was produced with 20th Century Fox Television for CBS, follows a team of doctors and support staff stationed at the "4077th Mobile Army Surgical Hospital" in Uijeongbu, South Korea, during the Korean War (1950–53). The show's title sequence features an instrumental-only version of "Suicide Is Painless", the original film's theme song which was popular enough to become the UK's best selling song hitting number 1and staying for 3 weeks in May/June of 1980. The show was created after an attempt to film the original book's sequel, M*A*S*H Goes to Maine, failed. The television series is the best-known of the M*A*S*H works, and one of the highest-rated shows in US television history. > — [Wikipedia - M*A*S*H (TV series)](https://en.wikipedia.org/wiki/M*A*S*H_(TV_series)) **Search Data:** While it is unclear how popular MASH has been since its initial release in the 1970s, we do have some data from [Google Trends as far back as 2004](https://trends.google.com/trends/explore?date=all&q=%2Fm%2F014gjp). Surprisingly, while interest in the show was on a downturn until December 2014, the show has recently enjoyed a slight upward trend in interest, with ...